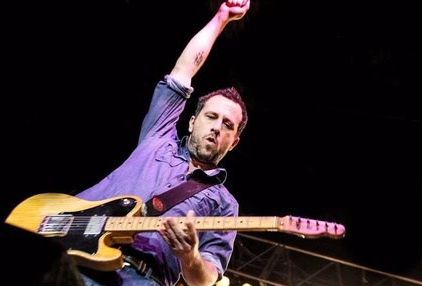 Will Hoge has slogged his way through years of van tours, bar shows and others having more success with his songs than his own band. He’s made some freakin’ great Americana rock and roll albums, including his most recent record Small Town Dreams. His shows are killer; a Telecaster-infused Memphis rock and roll blast.

Through it all, the consistent theme seems to have been that Will Hoge is just one of those guys who is better than people realize, meaning he may be in a van playing the 800-seaters for years.

But he’s smart. And his songwriting reflects it. You like Petty? Dig into Will Hoge. Shouldn’t be that tough.

And his new song, “Little Bit of Rust” from his forthcoming album Anchor brings Nashville neighbor Sheryl Crow into the mix, with a duet that blends the harmonies with a surprisingly biting electric guitar.  It’s a song that pairs his endearing and enduring grit with  a partner who might just raise his profile, even if that’s not his intention.

Read the Rolling Stone story about the partnership here.

Arriving at a meaningful place in life requires detours and surprises. And then, the destination can still be unexpected. We know this is true, because every damn one of us has been there.

And a pair of new albums last year, and two more on the way, Bobbie Lancaster may have finally found her road home. She has finished recording her first solo album, a second children’s CD, and along the way, developed a gutty yet sweet stage persona.

Her haunting vocals on “I’m on Fire” as part of this summer’s Grimm-organized “Hoosier Springsteen” concerts made the short, brooding song one of the best performances of the show. The Bloomington singer’s bouncing, smiling, in-the-moment stage presence cemented the musical package; the woman can crank it up like Sheryl Crow and Bonnie Riatt, and engage a crowd with her subtle stage charms. Watching Lancaster feels like we’re seeing a woman who knows her strengths and power, but is only beginning to refine and unleash it.

“I was scared to death,” she says of the shows, talking on the phone from her Bloomington home. “We had a rehearsal and I just felt I had to get in there and give everything I had. And at the end of the gig, I felt really good about my performance and overcoming that little confidence hurdle I had before the show.”

With an upcoming solo record, she is putting herself in front of whatever comes with it. In September, she recorded the album at Farm Fresh studios in Bloomington, with a band brewing a stew of rootsy, Americana music.

“I have cried and squealed with joy so many times that I think they (the band) are worried about me. It’s the most incredible thing to hear these songs I wrote on a mandolin be brought to life,” Lancaster says.

This new record will come a little more than a year after she released a catchy preschool-focused children’s album (“Bobbie Lancaster’s Little Folks”) and an Americana/folk record called “On with the Show” with the duo Stella & Jane.

“On with the Show” is an intriguing piece – Jane is Lancaster’s middle name. Using a middle name isn’t the quickest way to wider recognition, right? Maybe Bobbie wasn’t ready to come out from behind the one-name middle-name anonymity? That seems to have changed.

“I am looking forward to focusing on doing more solo stuff. It’s where I feel led to go right now,” she says. “Every CD I have done has been with a group and a compilation of different writers. I have probably 50 or 60 songs that I’ve just been sitting on, plus have written seven new songs since May – I have just had a nice creative spurt lately.”

As happens with most good stories, it hasn’t been a simple process to wind up where talent and opportunity intersect.

Some 25 years ago, Bobbie Jane Lancaster’s mother and father had her take in piano lessons, from kindergarten until fourth grade. She’d always had the gift to be able to sing, and even earned a full ride scholarship in music vocal performance to Indiana University, but blew the opportunity. It became a long road and indirect route that’s brought Bobbie to the point of making her first solo album.

“I was so young when I went (to IU), I wish I had a better grip on myself at the age that I went to college,” she says. “But I didn’t and I gave that up, nor really realizing what a gift it was to get that scholarship.”

She ended up going to Vincennes University, held three jobs while there, and started singing in a coffee shop when she was 19.

“That’s when I first found my own voice,” she remembers.

She has spent the past five years starting a family, and playing music – first with a Bloomington blues band called Code Blue, and more recently, with musical partner Stella Suzette Weakley.

“I was a real estate broker for about seven years, and actually got fired by some guy,” Lancaster admits, recounting how she and Weakley got together. “I had never been fired in my life and was shocked. I called Suzette – I had met her just once before – and went to work a real estate company she owns.”

From that sequence of workforce events, the two started playing music together. Weakley essentially served as Lancaster’s mentor, musical partner and teacher. Bobbie started by singing some background vocals when the two met at Weakley’s house.

“She had a little Contessa mandolin in her basement and said ‘Why don’t you pick this up, I’ll show you a few chords and see what you want to do with it’. When I picked up a mandolin, it just felt like I had been holding it forever,” Lancaster says.

“She taught me three chords, and I went home that night and I played until my fingers couldn’t stand it anymore. Then I iced them and I kept playing.”

On the Stella and Jane (with help from multi-instrumentalist and songwriter Jeff Foster) album , Lancaster’s singing shines on the self-penned CSNY-ish “The Rain”, the bluesy, sassy, Hammond B3-drenched “Fast Car” and especially on “Low Down”, a shorter than three-minute pop-rocker, hinting at a healthy John Hiatt influence.

“I have been really open with everybody in Stella and Jane (about the new solo work). I have their support,” she says. “We just all care about each other an awful lot, and I think by being open and honest makes those conversations easier. I think they both understand I am just coming into my own right now.

“I’ve been thinking about cutting my own album for years, and my friends have asked me to do it for years, and I’m at this beautiful stage in my life where I feel like I’m ready,” she says.

Lancaster says she wants to have the album out before February, when she travels to the Memphis Folk Alliance.

In addition to her new solo record, Lancaster cut a new kids album, recording a recent WFHB live radio broadcast of her show. Children’s music is a burgeoning part of her musical career, and includes weekly musical sessions at four different preschools, and appearances at Central Indiana public libraries, performing for kids and parents.

“I know what I want, I’m happy with what I’m writing, and these amazing people have shown up in my life and wanted to help me do this,” she says, referring to her studio band, led by Scott Kellogg, “I’m feeling the love right now.”

And more than ever before, Bobbie Lancaster is coming out from behind the middle name. She seems willing to show us the soul – nurtured with piano lessons, surviving through the opportunity lost at IU, and allowed to blossom on the bumpy road that has followed – that she knew existed all along.