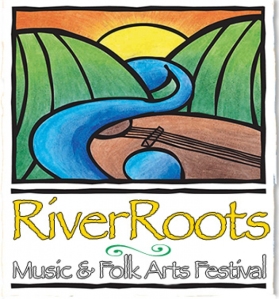 Greg Ziesemer has booked all the bands, and now he wants to make sure the beer is ready. When we caught up with him, he was riding in a van on his way to New Albany to visit one of the festival’s microbrewers for the upcoming Madison, Indiana RiverRoots Music and Folk Arts Festival. This year’s festival will take place on the weekend of May 18-20.

“We are bringing Sun King Brewery down this year and will [also] have five different microbrewers,” said Ziesemer.
In what is Ziesemer’s first full year as the music director, the festival will tilt slightly musically, as he and his committee has grabbed some uber-hot national acts that are both in — and out — of the folk genre.

Formerly known as the Ohio River Valley Folk Festival, this event has grown steadily in attendance; it struck gold last year by booking the Carolina Chocolate Drops just as they were going from little known regional performers to Grammy Award winners, Ziesemer would love to keep the “This performer is one the way up — remember you saw them here” connection.

“Roots music – it’s like the new folk. The name folk used to cover what we were doing, but now we’ve become broader. When people hear folk, they think Pete Seeger and Woody Guthrie. And we love them. And there may be some people who don’t want to come to folk festival who will come see music at a roots festival,” said Ziesemer.

For opening night, festival organizers booked The Band of Heathens as the headliner, with Americana rocker Hayes Carll on Saturday night. Carll’s album KMOG garnered the most Americana airplay for any album in 2011. Country folk-rock darlings The Black Lillies will headline Sunday.

Carll, an Austin, Tex. alt-country performer, built his reputation with rowdy country and rock shows throughout Texas and the Southwest. Much like The Band of Heathens, he’s a road-tested, rock and roll performer.

“Hayes Carll is a a rock band, and that’s the show they’ll do. And his opening band is five sisters (Searson), with a driving, really upbeat celtic band, but it’s anything but just celtic rock.”

Ziesemer understands the value of keeping the festival’s original idea of folk music alive, even with headliners that have strong rock and roll leanings. He says the committee has worked hard to provide varied musical styles. “We have singer-songwriters, Texas swing, a jug band, and a guy from Minnesota who is like their version of Rev. Peyton,” Ziesemer said. “We want people to hear jazz and country and blues too.”

According to Ziesemer, the festival draws many from the Indianapolis, Louisville, Cincinnati, Lexington and Columbus areas, and as many from the smaller towns within that region.

“The crowd comes from what we consider to be a 150 to 200 mile radius. We did have fans from as far away as North Carolina and Minnesota. But our crowds are [becoming] increasingly diverse. The new bands this year will help pull a younger crowd,” said Ziesemer. “Tickets sales are going very well, and I would love to see 8,000 to 10,000 people come through gates for the weekend.”

Organizers have added more children’s activities and have been “expanding the family attractions, because it is a family-friendly event,”said Ziesemer. He mentions a storyteller tent and smaller demonstration tents, where people will working in historic costumes, creating and teaching.

“What we want to be known for is bringing acts that are up and coming — bands with an upward trajectory. We had the Carolina Chocolate Drops play here last year, and nobody really knew who they were. And they blew people away here. Then they won a Grammy,” said Ziesemer. “We want to be a festival known as that discovery place, a launching pad.”

Sunday, May 20
12:30 pm Appalatin
1:45 pm Michael Kelsey
3 p.m. Whiskey Bent Valley Boys
4:30 p.m. The Black Lillies
Meet the bands
Here’s a look at the headliner and their opener for each night.

Searson
The sisters Searson’s numerous tours over the past eight years that have included stops in the U.S., Ireland, Germany and Denmark. Playing a sound described as celtic rock, they grew up in a musical family in Canada. Their dad Mike once played guitar and sang with the band.

The Band of Heathens
Legendary Texas musician Ray Wylie Hubbard said of the American rock band that they were, “kinda like if Rimbaud, Keats, and Rilke strapped on guitars and hooked up with a bad ass rhythm section; literary and sinfully cool.” The Austin, Tex hard-touring Band of Heathens released Top Hat Crown & the Clapmaster’s Son in 2011, and a four-disc, two-volume, live DVD release called The Double Down – Live in Denver (Vol. I & II ).

Over the Rhine
Cincy-based husband-and-wife team of Linford Detweiler and Karin Bergquist are still making great music 20 years after their 1991 debut. One of RiverRoots Festival Greg Zeismer’s favorites. Over-the-Rhine is the name of a downtown neighborhood in Cincinnati, Ohio, where the band got its start.

Hayes Carll
Carll’s KMAG YOYO (and Other American Stories) album was the most played Americana album of 2011. Spin Magazine named it the third best country album of the year, behind top-ranked Eric Church and runner-up Gillian Welch. The album title is a military acronym that stands for “Kiss My Ass Guys, You’re on Your Own,” the album hit #12 on the country album chart and #17 on the Billboard Album Chart.

The Black Lillies
With Whiskey Angel, The Black Lillies kicked off their first national tour at the Ryman Auditorium. Pretty good omen, right? Cruz Contreras got the band together to record that first album, and the band took their name from a song on the first record. They chose to use a fan-funded model to record their album, 100 Miles of Wreckage, rather than signing to a label.