For more than four hours Friday night at Radio Radio, The Elms said goodbye the best way they knew how … END_OF_DOCUMENT_TOKEN_TO_BE_REPLACED 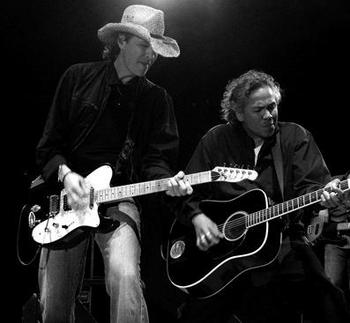 The BoDeans’ Friday show at the Vogue will be their one-millionth appearance in Indianapolis, as they are in town to play tunes from their ninth studio album, Mr. Sad Clown, released back in April.

OK. Not really. Yes, they are at the Vogue Friday, but have only played in our city 905,383 times since 1987. Every damn one of them a good show. Really. I’ve seen them so many times in the past 20 years – at the Vogue, or in Cincy at the Blue Note, or on a cold Monument Circle during Final Four weekend – and can’t remember walking away thinking that the band hadn’t worked hard at making a connection. The sound they make is unique. The new album is thoroughly BoDeans, and that’s why they survive.

We should be thankful there is a BoDeans; a band that rolls on despite just one (“Closer to Free”) song that could be considered a real hit. They have stayed true to their roots-rock and roll soul. Every show rocks, the audience sings, and guitars and drums are played loudly. Tell me what’s wrong with any of that? END_OF_DOCUMENT_TOKEN_TO_BE_REPLACED 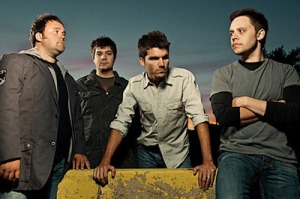 For their final show before the group disbands, The Elms have sold out Radio Radio this Friday night (July 30). The group that broke out of Seymour as a Christian band and went on to make vibrant, heartfelt and truly midwestern rock and roll is calling it quits for reasons a bit ambiguous, and finish their run with this final Indianapolis show.

According to their Facebook page, the show will be filmed in HD, using multiple cameras. Singer Owen Thomas writes on his blog that “we’re kicking around several ideas for the footage, which range from a complete concert film to a documentary about the cumulative 10-year experience of The Elms.”

There is a terrific blog by Dan Ficker at inreview.net where Thomas addresses questions surrounding the group breaking up. In the interview, The Elms’ lead singer said it was just a feeling that things should stop. END_OF_DOCUMENT_TOKEN_TO_BE_REPLACED

→ A couple hours south of Indianapolis, at the historic Churchill Downs, this weekend’s HullabaLOU Music Festival three-day concert begins Friday, and runs through Sunday. Since I’m not going, it affords the opportunity to watch a little of their live webcast. For me, a live music webcast is very nearly as good as finding treasure chest full of Coors Light and beef jerky. I like to geek-out and see how they handle the technical parts (audio, camerawork, etc…) of the webcast. Most of the time, I end up entranced at the coolness of watching it live, paired with being pissed because I would have done it differently. But that’s a “me” problem, right? END_OF_DOCUMENT_TOKEN_TO_BE_REPLACED

The Avett Brothers, out on the road for more than a year promoting the gorgeous I and Love and You … END_OF_DOCUMENT_TOKEN_TO_BE_REPLACED