I listened to the album. It ain’t today’s country music. Sounds like someone smoked a couple bowls, put on Pink Floyd’s “The Wall”, and said “Hey man, we could do that”. The album is a little weird – both jarring and interesting. And a bit self-indulgent and pompous. Possibly brilliant.

Made while he was without a record label or management, Jennings told the LA Times he “felt like I was at rock bottom. I was feeling pretty voiceless, and depressed.” So he did what all depressed rockers do: he drove cross-country in an RV with his family.

“We were in the middle of nowhere, and every night about midnight I’d hear these programs on the AM dial. It was all this really scary talk about the ballooning police state, the globalization agendas and whatnot.”

Could be the leader to win the Oddball Album of 2010. And that’s OK.
Listen Here – “The Illuminated” from Black Ribbons 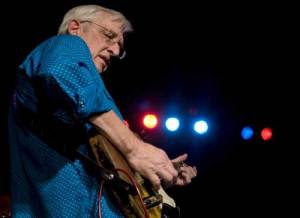 Nearby Show Rob Recommends: Bill Kirchen and Too Much Fun comes to the Lafayette Brewing Company in April 17th (it’s a Saturday night). The rockabilly guitarist from Ann Arbor, MI is best known as a member of the original Commander Cody and His Lost Planet Airmen. He’s also a crunchy Fender telecaster guitar player, and his music is tagged as “Dieselbilly”: part rockabilly, part truck-drivin’ music. He’s being brought to town by the terrific Friends of Bob live music co-op. An 8:00pm show, with doors at 7:00pm. Tickets on sale March 12th for $10, or $12 day of show. Kirchen released “Hammer of the Honky Tonk Gods” in 2007; the title cut a greasy ode to Tele guitar slingers.

***
Gotta like that the new Johnny Cash release was #3 on the Billboard Album chart this week. “American VI: Ain’t No Grave,” sold 54,000 units. Sade (huh?) was the top album from last week (and for he third week in a row – what the hell is that about?) , selling 127,000 units of “Soldier of Love.” Country music’s Fleetwood Mac-ish Lady Antebellum’s “Need You Now,” was second. Lady A sold 118,000 units, down 18 percent from the previous week. Overall CD sales CD sales were down 13 percent compared to the comparable sales week of 2009 with 5.99 million units sold.

***
One of those stories that we knew was probably already happening, and just couldn’t prove it: Four California men behind a ticket broker company have been charged with hacking into Ticketmaster’s website, buying up over 1.5 million tickets and re-selling them. As Wiseguy Tickets, they reportedly made $25 million between 2006 and 2009. The New York Daily News reports that for a Bruce Springsteen show at Giants Stadium in 2008, Wiseguy scooped up half of the floor tickets. They also hacked in to get concerts tickets for AC/DC, Bon Jovi, Billy Joel, Hannah Montana, Coldplay and Phish. Among the companies they hit were Ticketmaster, Live Nation, Tickets.com, and Major League Baseball.